Our book "Thistleflower" is part of the txt.

The book "Thistleflowers" is available.

If you want a hardcover paper edition - there are three left.

A new report from Poland ist worth to be recognized. It could help to regard good things at war.

Our friends from Bosina - Herzegowina held a speech in New York - UN on October 30.

Great words to act in loce and no war,

Alan was fathered by a rape like me and adopted.

21st Century Reflections on Sexual Violence in Wars, its Transgenerational and Transnational Impact 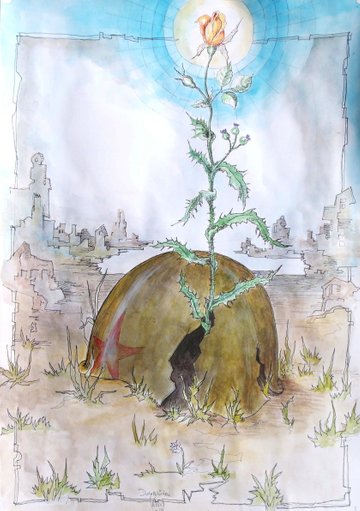 One of the “Thistleflowers” asked her brother to paint a picture for the first meeting of the German “Russian Children” in March of 2014. She told him that when reading Tolstoi’s short story “The Tatarthistle” * she often saw a connection to the “Russian Children” and to their mothers.

In the story this thistle is described as strong and resilient, its beautiful blossom vulnerable.

It cannot be plucked and it cannot be broken. It can only be shredded, stomped into the dirt or ripped out by its roots. It does not fit in with the other, more delicate field flowers.

Two pictures were painted, gifts to the sister and to the participants of the meeting in Leipzig.

The steel helmet with the red star on German soil. The thistle, symbol of the children fathered by Soviet soldiers. Many thistles turned later into roses.

The memorial in Berlin-Treptow. The Soviet soldier holding a child on his arm. He was known for his fondness of children and he left children behind.

Many of them lived in the shadow of society. Unseen and not mentioned. Some to this day.

The process of confronting the psycho-social consequences  of WWII and the Third Reich started decades after the end of the war (Glaesmer 2014). In the meantime a number of research results are available which describe the long lasting and complex consequences of the traumatic experiences of WWII. In cooperation with the study group of Philip Kuwert (University of Greifswald) we have intensively committed ourselves to the study of this subject in recent years.

Out of a study addressing the consequences of the rapes at the end of the war a question arose about the possible existence of children of these rapes. To explore this question, contact was established with an interdisciplinary research network that deals with children who were procreated by local women and foreign or respectively, enemy soldiers in conflict and post conflict regions.

The German Besatzungskinder (children of the occupation) are part of these children of the war. They were procreated at the end of WWII and during the years after by Allied soldiers and German women. Up until this point historical works about the Besatzungskinder existed, but psycho-social research addressing the consequences of growing up as a child of the occupation of WWII was missing.

In cooperation with the study group at the University of Greifswald in 2013 we initiated research to investigate the experiences of these Besatzungskinder and how they are doing now. As we attempted to find participants for the study, we made numerous contacts and met with individuals who had actively dealt with their life story, had contact with other children of the occupation, or perhaps had been able to find their father or his descendants, and who had coherently integrated the story of their birth into their identity. On the other hand, there were Besatzungskinder who described themselves as psychologically afflicted and alone with the subject. Some of them had never spoken with anyone about it, attempts to find out anything about their father had been unsuccessful or had never been made.

This observation brought close the thought that the possibility for an exchange and contact with other individuals of similar background might help to find ways to positively deal with the subject. Maybe the exchange with like-minded persons would have an integrating effect. Now one was part of a group of people with similar experiences and no longer an individual standing alone.

On the internet websites are available for the children of former American  www.gitrace.org as well as French soldiers of the occupation. www.coeursansfrontieres.com

They help children with their search and facilitate meetings between interested individuals and those who are searching. Therefore, during the search for participants for the research study at Leipzig and at Greifswald university interested individuals were asked if they have or desire contact with such organisations. Especially persons whose father served in the Soviet Army during or after WWII stated a great need for support with their search for their biological father.

However, at that time an official way to start a search was not available to them. That situation called for change. The so called Russian children should also be able to enter into an exchange with each other.

This is how the idea started to create a network for the children of Soviet soldiers. All participants in the study who reported that their father was a Russian soldier were asked if they would be interested in a network for the purpose of communicating with each other. The plan was realized in March of 2014 and resulted in a small circle of nine people. At the first meeting of this group at the university of Leipzig the idea to write this book was discussed.

Furthermore, out of the original network a website for the ‘Russian children’ developed.

Glaesmer H (2014). Traumatic experiences among the older German population – significance for the mental and physical health of the population.

It is good that we remember the end of the war after 75 years with its horrors and the many victims.

Since biblical times one group has been forgotten; women and children of the enemy.

In all wars, from antiquity into modern times, women have been part of the spoils of war for the victors; not only as victims but also as lovers. Out of these connections children emerge who have no place in the annals of history.

When the soldiers of the Wehrmacht occupied vast areas of Europe, they had girlfriends and children. In Norway and Denmark the Nazis encouraged such relationships.

In Poland and in the Soviet Union racial prejudice prohibited such relationships; but there too, many children were conceived in violence and in love. These children of the enemy were ignored, and they have had a very difficult time. Under Stalin and up to this day very little has been reported about it.

And what did it look like when the Allies advanced into Germany?

Soldiers of all allied forces had relationships with German women. There were rapes as well as love relationships that both had consequences.

The mothers had to endure discrimination, and the children experienced stigmatization early on, partly perpetrated by public institutions. As late as 1955 the GDR instituted rules regarding support entitlement for the children.

Not until 2018 did the government of Norway apologize to the women and children for the governmental abuse that had occurred in 1945 and thereafter.

In Germany, the public is not interested in the children of allied soldiers; only recently has research focused on these children.

Meanwhile, sexual violence is systematically used as a weapon of war.

For example, in Serbia and in Arabic countries rapes were part of humiliating the civilian population. The problem exists even among peace keeping of the UN. In Africa, sexual violence perpetrated by soldiers is the order of the day.

Throughout my entire life I have concealed that I am the product of a rape. Academic research brought me in contact with other children of war and this is how I learned to better deal with my fate; many are still wrestling with their life story.

As an example I want to mention Anton

There are many Antons, Tonis, Antoschas, and Antoines in the world.

Actually, I have seven fathers.

That’s how many fell over my mother.

Actually, we – she and I – should not be alive.

The last one wanted to shoot her.

Actually, only one of the seven stopped him.

I wish he were my father.

Actually, I still cannot talk about it.

But it comes out of me like a scream.

Actually, I want some help.

Maybe I will still be able to talk. Before I die.

Shortly before her death in 2009 my sister-in-law wrote to me:

Do you really have such a problem with the conduct of your father? One cannot judge the behavior of a human being separate from the circumstances.

What do you know about what he experienced in this war and what he had suffered? Hunger and thirst and fear of death, the sight of horrible wounds, lingering death without any medical attention, the death of family members and friends.

Like all soldiers back then he had to be severely traumatized because of what he had experienced. He was part of a unit that gave him strength. In this group rapes were perpetrated, as has been customary since times immemorial and it was accepted that not only the material belongings of the enemy but their wives and daughters fell to the victor, too. There is no war in which the victorious troops did not assume the right to rape, as if it was a kind of natural law.

Looked at it from a distance it is despicable. How about fnding oneself in such dreadful circumstances? Could not every one of us become a murderer under such extreme conditions? By the same token, in chaotic situations, any man can turn into a rapist. Whoever is caught up in in such a brutal, cruel and unjust war and does not emerge with a damaged soul, is a saint. Your father was most likely not a saint. He was a human being like millions of others. Desperate, injured, full of rage, driven by revenge, no longer the master of his own mind.

In peace time he may have been a loving husband and father.

That you don’t know. The only thing that is safe to say is that war kills the good in people. In Iraq, in Afghanistan, everywhere in the world.

I carry the hope that in all countries, especially in Russia, the subject of ‘Children of War’ will be addressed openly. One does not have to forget, but it is possible to forgive, others and oneself.

This week we screened Wars Don't End (De Uønskede) at the Norwegian Parliament in Oslo (Stortinget) in co-operation with UNICEF and SV - Sosialistisk Venstreparti. The Film narrator Liv Ullmann was with us, showing heartfelt commitment for the topic introducing the film together with director Dheeraj Akolkar.

The screening was followed by a panel discussion on the topic of Children Born of War. In the panel was former prime minister Kjell Magne Bondevik, now working at The Oslo Center, Professor Ingvill Mochmann with the international research network for Children Born of War (CBOW)/Peace Research Institute Oslo (PRIO), Ivar Stokkereit - Head of Policy and International Law for the Norwegian Red Cross (Røde Kors), Karin Andersen - Parliament member for SV, and human rights activist and leader for Selvhjelp for innvandrere og flyktninger (SEIF) Gerd Fleischer who also has a central part in the film. Moderator was Kim Noguera Gabrielli, assistant Executive Director at UNICEF Norway.

Thank you to all who listened and contributed. We are honored and grateful to have had the opportunity to take this significant step in the outreach of 'Wars Don't End', in order to add our efforts towards the protection of children born of war all over the world. 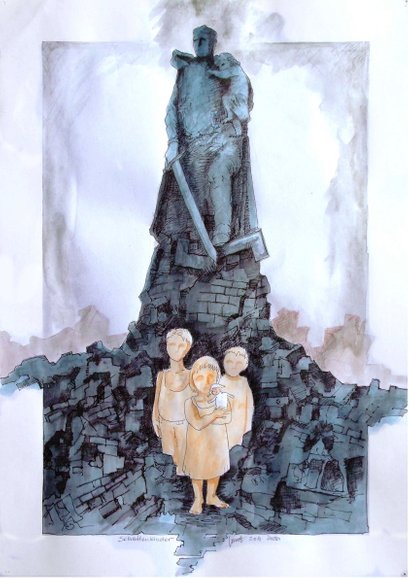 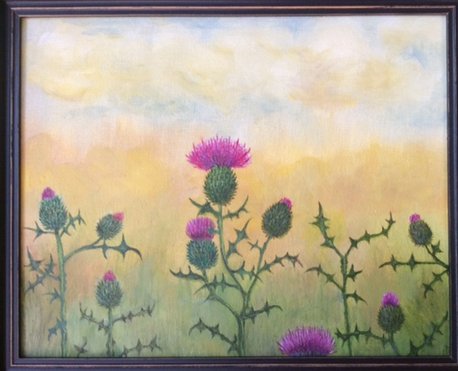 This painting is a gift from Ursula Scott (Washington State USA) for us.

Thanks to all who are supporting us.

Send us a mail if you want to know more.

German printed edition is available at any time. .